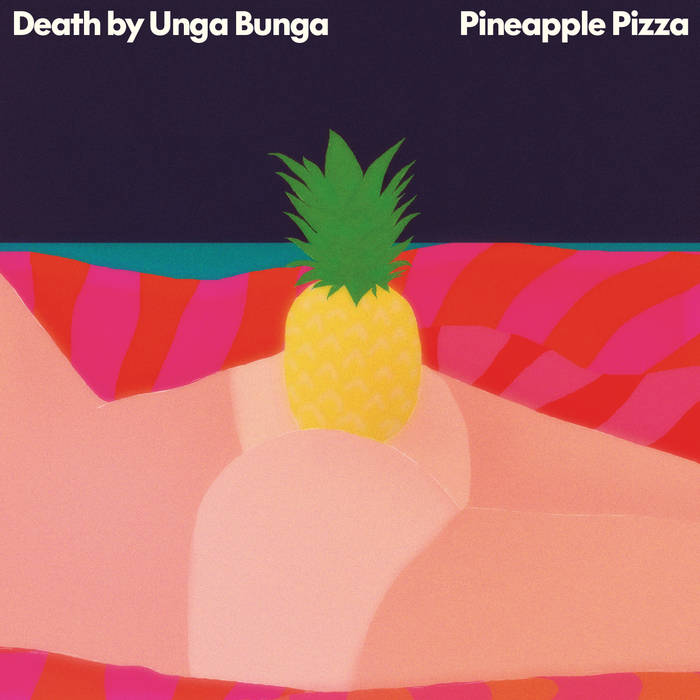 Yo, world! Say hello to Death By Unga Bunga and their new album Pineapple Pizza. The album is being released world-wide on by Norwegian label Jansen Plateproduksjon.

Death By Unga Bunga (DBUB) are five nasty guys from Moss, the garage rock capital of Norway, and just like in fairytales formed with lead singer Sebastian Ulstad Olsen holding auditions in his own garage. Since then DBUB have restlessly visited town after town, village after village spreading their energetic mix of garage, psychedelia and power pop to an increasingly bigger audience. Seeing them live an experience you’ll never forget, an experience that’s best described as being hit by a rock’n’roll tornado. Death by Unga Bunga never hold their fire and Pineapple Pizza is no exception. The album is the band’s fourth in five years and its 10 songs, from start to finish, showcase what the band has become known for: hot guitar riffs, irresistible choruses and a rhythm section with burning feet and fingers. “Musically it’s a protest against bad rock’n’roll,” says guitarist Stian Gulbrandsen. “It’s about demanding processed cheese, intoxication, high peaks, fun and love. But also about the pain from taking in too much of it.” Pineapple Pizza was produced by the band, with Morten Øby (The Lionheart Brothers/Pirate Love) behind the controls during the mixing and the studio. Pineapple Pizza is the first LP to be released in North America and is the follow up to the band’s Tell Me Why EP which came out this past Fall. The EP’s title track appears on the album and was also released as a single, peaking at #7 on specialty radio and in Top 50 on the college charts.

With Pineapple Pizza DBUB have created an effortless and infectious continuation of the group’s love for quality music from the 60s and the 70s. Artists like 13th Floor Elevators, The Sonics, The Mummies (who named them), Cheap Trick, Ramones and The Byrds at their most colourful. Death by Unga Bunga are combining the best from our musical heritage, adding a timeless energy, and mixing it into a strong contemporary form of expression. Death by Unga Bunga will be spending 2016 all over the world: don’t miss one of Norway’s very best live bands when they visit your hometown. You should order a pizza on the way.